skip to main | skip to sidebar

We are proud to announce the arrival of Ravi's 2nd. It arrived about a week ago, all swaddled in white, causing quite a stir in the office. We are, of course, referring to the 2nd edition of "Trade Marks Act - A Commentary", published by the good people at Lexis Nexis. For a closer peek at the young 'un, please click here.

The Registry of Trade Marks recently held that the mark “Raffles” was not similar to “Raffles FINE ART AUCTIONEERS”.

Raffles Fine Arts Auctioneers Pte Ltd (the “Applicant”) had filed to invalidate Raffles Corporate Consultants Pte Ltd's (the “Registered Proprietors”) registrations for the sole word “Raffles” (the “Raffles Marks”) for business management consultancy services and financial consultancy services under Class 35 and Class 36 respectively. The application was grounded on the basis that the Applicant had earlier rights in the unregistered marks “Raffles” and “Raffles Fine Arts” used in relation to business consultancy and financial solutions (“the Services”), such that use of the Raffles Marks would amount to passing off. 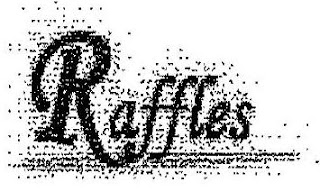 One of the Raffles Marks

The Applicant had alleged goodwill in the mark “Raffles”. In support, the Applicant submitted evidence of its sales figures, official receipts issued to clients, promotional and advertising materials, a schedule of clients to whom they had provided advice and declarations made by clients. However, it was clear from the evidence that the actual mark used consisted of the words “Raffles Fine Arts Auctioneers”, and not “Raffles” per se. The Registrar also noted an absence of tax invoices for the Services, and commented that this made it difficult to prove the actual provision of such services.

The Applicant's Mark
Taking into account the sales volume and promotion of the Applicant’s marks, the Registrar was of the view that it had not acquired sufficient goodwill in relation to the Services.

With regard to the element of misrepresentation, the Registrar commented that it is the impact on the persons to whom the misrepresentation is addressed, and not the state of the mind of the defendant, that is material. In this case, the marks were found to be visually, aurally and conceptually dissimilar. Moreover, as the word “Raffles” is peculiar to Singapore, being the last name of her founder, Sir Stamford Raffles, the public would be more discerning of marks consisting of the word “Raffles”. As such, the Registrar held that there was no likelihood of confusion and therefore the element of misrepresentation was not present.
As the first two elements of passing off (i.e. goodwill and misrepresentation) were not made out, the Registrar found it unnecessary to consider the third element of damage. Consequently, the invalidation action was dismissed and the Applicant was ordered to pay the Registered Proprietors’ costs.

We are pleased to note that the Intellectual Property Office of Singapore has taken heed of practitioners' feedback, and has started to publish the full text of its legal decisions on its website (look under 2010 for the lovely inaugural .pdf file). Prior to this happy development, only decision summaries were made available and practitioners had to look to other sources such as Lawnet for the full text.
Posted by VH at 9:36 AM No comments:

However, the Singapore Registry has recently highlighted that the New Zealand Patent Office does not examine patent applications for inventive step. Therefore, while Singapore patents proceeding to grant on the strength of a corresponding New Zealand patent (or final examination results thereof) will still be granted, such patents may be challenged on the basis that they have not been examined for inventive step. In that event, it is possible to request post-grant search and examination at the relevant time.
In the circumstances, patent applicants are encouraged to rely on corresponding patents of prescribed offices i.e. the United States, United Kingdom, Australia, Korea, Japan, European Patent Office (if filed in English), Canada (if filed in English), which examine for all three criteria of patentability, or final examination results thereof.

Meanwhile, it is believed that the current New Zealand Patents Act of 1953 will be replaced by a new Act, which will, among other changes, introduce inventiveness as an examination criteria.
Posted by VH at 12:58 PM 3 comments:

Thailand (country code: TH) has acceded to the Patent Cooperation Treaty ("PCT") on 24 September 2009. Thailand is the 142nd contracting state to accede to this multilateral pact that facilitates the filing of patents in multiple countries. The treaty will enter into force for Thailand on 24 December 2009.

With respect to any international applications filed on or after 24 December 2009, Thailand will be automatically designated and will be elected in any demand for international preliminary examinations. Nationals and residents of Thailand will also be able to file PCT applications from 24 December 2009.
Posted by Asha Joseph at 9:12 AM No comments:

23 October marks the Designers Association Singapore's inaugural Singapore Designers Day, where the public is given an opportunity to acquaint themselves with selected members of the DAS and what they do. We are privileged to be one of the 9 designated members, the rest being esteemed design houses and branding consultants, and hope to be overrun with attendees thirsting to know more about us (we promise to throw in a little bit of intellectual property too).
Posted by VH at 9:02 AM No comments:

There was a gathering of IP lawyers and patent attorneys at IPOS yesterday. An email had been sent some days before, announcing a briefing by IPOS on changes to the Patents Rules. Thinking this must surely refer to the recent substantive proposed changes to the patent system, yours truly mentally prepared herself for an afternoon of heated discussion between "them" and "us". It was therefore somewhat of a let-down when we were told that the briefing was for something else, and that it would indeed be brief.

So here they are, the 2 most recent changes to the Patents Rules, which will take effect later this month :

1. The Hungarian Patent Office joins the Austrian, Australian and Danish Patent Offices on the panel of search and examination authorities appointed by IPOS.

We are a boutique firm in Singapore specialising in intellectual property law. We work a lot, play a lot, drink (some) and now, we blog. We aim to bring you the latest IP news from Singapore, so visit often, or subscribe to get updates sent to you. You can learn more about us at our website; or contact us at mail@ipravi.com.